Below you can see the fantastic selection of shooting games and activities that we have for all ages and abilities.

There is Laser Clay Pigeon Shooting, Laser Shot Video Shooting,  one-on-one Archery Tuition, Axe Throwing Tuition, Crossbow Tuition and even Laser Paintball.  All of these shooting games and activities are operated by our fully trained and experienced staff. Laser Clay Pigeon Shooting is a sport which can be enjoyed by everyone.  The players use a modified shotgun to fire an infrared beam at a clay launched from a conventional clay launcher whenever a trigger is pulled.  The Laser Clay control module/scoreboard generates the shotgun ‘bang’ and when a player hits the target it reproduces the sound of a breaking clay.

An indicator on the gun instantly tells the player whether they have hit or missed the target and spectators and players can see the score for each player on the large electronic scoreboard.

As with any sport, there are different levels and classes of Laser Clay shooting enabling it to be played and enjoyed by a wide range of people, whether as individuals or as part of a team.  In each round of shooting up to 5 people can aim at the same target which will be launched from a number of different positions at various speeds and angles.

Not only is Laser Clay Pigeon Shooting environmentally safe, but as each gun has been deactivated there is no danger to participants or spectators, and even children can use them in total safety

In many countries, Laser Clay Shooting is one of the most popular shooting sports and provides the opportunity for everyone to enjoy the thrill and excitement of shotgun shooting in perfect safety without any threat to the environment. Thousands of people play just for fun, others treat it as a serious and competitive sport

Laser Clay Pigeon Shooting is played with authentic but deactivated 12-bore shotguns.  Each system has 5 shooting guns and a control module/digital scoreboard.

Incorporated into each gun is a dedicated microchip which controls the infrared beam fired by the gun.  Each gun has an individual radio transmitter which sends information to the control module, which then reproduces the realistic ‘bang’ and works out the scores and displays them on its large integral scoreboard.

The system can be used during the daytime or at night. For use outdoors a minimum area of 30m x 10m is required to enable the clay to fly and land. A typical outdoor layout is shown below.  The clays used in daytime come in 3 fluorescent colours and luminous clays are available for night use.

The Laser Clay launcher holds up to 55 clays and has a built-in unit which charges the luminous clays. It can be adjusted to fire clays at different heights and angles and a clay is automatically launched each time a game is started. If you are looking for some kind of competitive game to help with team building, or simply just for fun, then this is a great addition to most events whether indoor or outdoor.  There are a few games to choose from like Pheasant Flush and Speed Trap Simulator which can help you hone your hunting skills.

Space required:  To use our 2m x 2m projector screen and ultra bright projector we require an area of at least 7m x 3m. 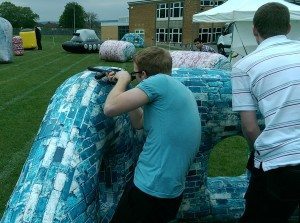 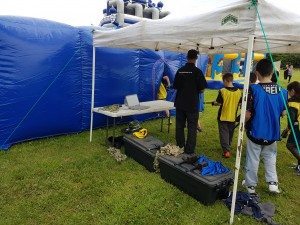 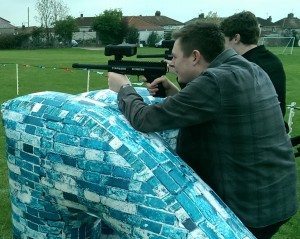 Not all laser tag guns were created equal. You will appreciate this when you play with our military grade laser tag rentals that use infrared and RF signals. They are sophisticated to give you the intelligence and technology needed to eliminate your opponent but are simple enough to be used by everyone.
The Barracuda System is a lightweight, compact system suitable for the more serious laser tag players. The manufacturers have taken the popular Tippmann 98 Custom Marker and converted it to a permanent infrared transmitter and receiver. A laser is activated by the electronics in the paintball marker when the trigger is pulled. The receiver shows number of shots, number of hits and number of players eliminated. There are lights and sounds that advise players when a hit is made and who has been hit or eliminated.

This is the perfect system for adults and for children from 7 years of age.

Space required:  Outdoors –  if you have lots of space (approx. half a football field) then we recommend our inflatable obstacles.  However if space is limited or you are looking for that indoor feeling then our Laser Paintball arena is a great option. Archery:
Under the tuition of our experienced archers, you’ll be let loose with a light but powerful long bow and hopefully by the end of the session you will be hitting the bulls eye with regularity.

Crossbow Shooting:
Crossbows are basically guns with arrow bolts instead of bullets. With a draw force far in excess of what can be achieved with a regular bow, you’ll be satisfied when the crossbow bolt hits its target.

Axe Throwing:
Embrace the warrior inside you wanting to throw an axe! Whether you’re an armchair thrower or a professional axe thrower, you will learn to master the technique of not only throwing an axe without hurting yourself but more importantly hitting something that won’t get you done for murder.
WHAT YOU NEED TO KNOW – We operates a strict no alcohol policy for participants.  Any person or group deemed intoxicated will not be able to participate in activities and will not be offered a refund.

AAA Inflatables is also a manufacturer of Bouncy Castles. Please see our Bouncy Castle Sales Site from the link above or on
Google and Yahoo

Take a look at our other entertainment websites below –

AAA Inflatables Ltd Bouncy castle hire and Sales. If you are looking to set up a bouncy castle hire company, give us a call or email for advice. We are here to help you make the right decision which best suits your needs and budget. We hold many bouncy castles in stock for next day delivery. Come and see the range of bouncy castles we have for sale in our 8000 sq ft unit all under cover. We are based in Cambridgeshire with easy access from all over the country and prices start from as little as £50/ day hire or £550 for sale